The Rensselaer County Bar Association is a professional body of lawyers serving Rensselaer County, NY. We are dedicated to serving our members. Check out our bylaws, as Approved by the Members at the 2013 Annual Meeting. 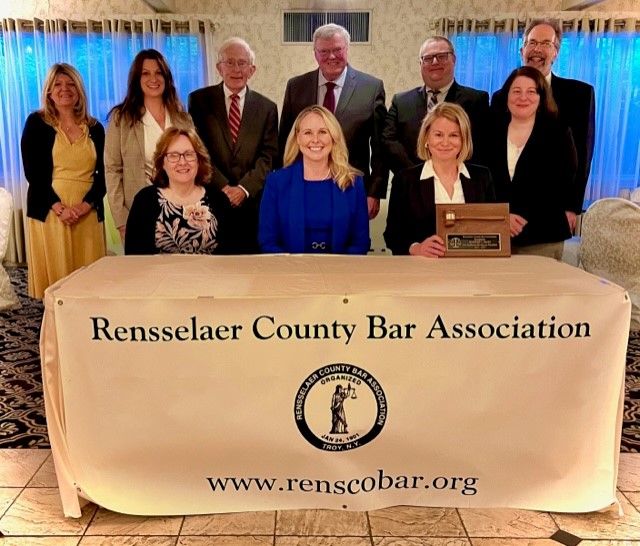 Linda B. Johnson is a partner at Hinman, Howard & Kattell, LLP and the senior attorney of the Albany office. Linda initially joined the firm in 2003. She rejoined the firm in 2010 after serving as an appellate court attorney for the New York State Appellate Division of the Supreme Court, Third Judicial Department from 2009-2010. Linda focuses her private practice on plaintiff’s personal injury, civil and criminal appeals, construction disputes, Article 81 Guardianship proceedings and general litigation.

Linda has extensive in-court trial, motion practice, negotiation and mediation experience, and has written and argued countless appeals. Linda is also part-time Rensselaer City Court Judge, presiding over criminal, civil, traffic and code matters. She has served in this role since April 2020.

Jaime has been a lawyer for thirty years, and is a graduate of Lansingburgh High School, The College of St. Rose, and Western New England School of Law. Jaime practices law at the Law Office of Jaime B. Thomas, PLLC, in Latham. His major areas of practice include construction law, business law, litigation, Real Estate, Wills and Estates, and Matrimonial and Family Law.

Jaime has been Schaghticoke Town Justice since 2002, and has also been Acting City Court Judge in Albany, Troy, Rensselaer, Cohoes, Hudson and various Town Courts.
Jaime has been involved with several civic organizations, including as a Past President of the Thomas and Helen Knickerbocker Memorial Playgrounds, and Past President of the Lansingburgh Rotary Club. Jaime is currently President of the Board of Directors of the Lansingburgh Boys and Girls Club. Jaime lives in Speigletown with his wife Janet, and they are visited frequently by Jennifer when she gets away from Manhattan.

Anne Coonrad graduated from Samaritan Hospital School of Nursing in 1984 and practiced nursing for over 30 years, predominately as a staff nurse in the emergency department at Samaritan Hospital. In the late 1990’s, she developed the Sexual Assault Nurse Examiner (SANE) Program for Rensselaer County. The SANE program provides victims of sexual violence individualized care and evaluation by specially trained nurses. Ms. Coonrad worked closely with local law enforcement agencies, the Rensselaer County District Attorney’s office, and community leaders as the Coordinator of this program.

Ms. Coonrad remains active in nursing as a member of the New York State Board for Nursing and serves as its current Vice-Chairperson. The Nursing Board’s primary mission is to protect the public from unsafe practice. In this role, Ms. Coonrad participates as a panel member during disciplinary and moral character hearings and acts as an advisor during Professional Assistance Program meetings. Ms. Coonrad is the treasurer and board member of the Samaritan Hospital School of Nursing Alumni Association.

Tara (Colangione) Kersey is the Principal Law Clerk to the Hon. Gerald W. Connolly, Administrative Judge of New York State’s Third Judicial District. She has served as principal law clerk to Judge Connolly since January 2007. In 2006, she served as an Assistant Counsel for Governor George E. Pataki and prior to such position, commencing in late 2001, she was in private practice at Holland & Knight, LLP in Boston, Massachusetts. Ms. Kersey earned her B.A. from the State University of New York at Geneseo in 1996, a J.D./M.B.A. from Albany Law School and Rensselaer Polytechnic Institute in 2001, and an L.L.M. in Taxation from Boston University in 2005. She was an Associate Editor of the Albany Law Review. Ms. Kersey was born and raised in Troy, New York and currently resides in Troy with her husband John.

Prior to his legal career, David worked in various local government positions, including as Director of Operations for the City of Schenectady, the Town of Niskayuna, and the Schenectady County Legislature.

Mr. Fronk lives with his wife, Laura, and their two children in Rotterdam, New York. Mr. Fronk is also active in his local community, including serving on the Schenectady County Public Library Board of Trustees and supporting various pediatric cancer charities. His son is a pediatric cancer survivor.

April M. Dalbec is a partner in the law firm of Whiteman Osterman Hanna LLP. Ms. Dalbec focuses in matrimonial, family court, and plaintiff’s personal injury litigation. She is admitted to practice in the state courts of New York and Massachusetts and is also admitted to practice in numerous federal courts including the United States Court of Appeals for the Second Circuit, and the United States Supreme Court.

April lives in the Town of East Greenbush with her husband, Rick, their daughter, Alexandra and their son, Jackson. In her free time, April is a certified health and wellness coach assisting others in meeting their health goals.

Jennifer Shatz is Principal Law Clerk to the Hon. Justin Corcoran, Supreme Court Justice in the Third Judicial District. In that capacity, Ms. Shatz researches and analyzes complex legal issues, drafts decisions and orders, conducts conferences, and confers with and advises the Judge on a daily basis on the variety of civil actions pending before the Court. Jennifer previously served a Principal Law Clerk to the Hon. Patrick J. McGrath, Supreme Court Justice in the Third Judicial District. Prior to her clerkships, Ms. Shatz was the Bureau Chief of the Special Victims Unit in the Rensselaer County District Attorney’s Office, overseeing the prosecution of sexually based offenses against children and adults, as well as all crimes against children. She was also the Chief Appellate Attorney for the last year of her employment there, arguing cases before the Third Department and the Court of Appeals. She graduated from Albany Law School in 2003, where she was an Associate Editor of the Law Review. Ms. Shatz is also active in her local community, including the Brittonkill Parent Teachers Student Association and the Brunswick Food Pantry. Jennifer resides in Brunswick with her husband Mark and her daughter Ella.